Get fresh music recommendations delivered to your inbox every Friday.
We've updated our Terms of Use. You can review the changes here.

by The Scottish Enlightenment 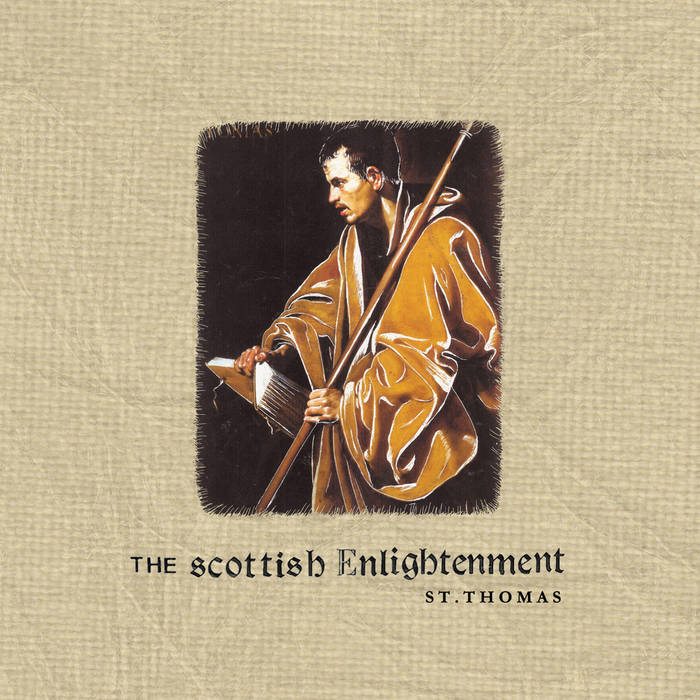 St. Thomas documents a crumbling faith, the change from believing in an omnipotent being to not believing at all, like a graph where one line traces the rising intellectual integrity and the other traces the plummeting sense of purpose and worth. Along the journey relationships between people, families, friends and lovers are pondered, how these morph and change, and how time, distance, and place can form the strongest of bonds as much as they can birth niggling insecurities.

Gal Gal’s space-age arpeggios act like a post-rock estuary in preparation for the open seas of gargantuan songs about our place in the universe; Earth Angel reverberates with the sound of star-gazing guitars and sleepy rock hitting the crown of a big stone church. Named in tribute to Marvin Berry and the Starlighters – Marty Mcfly fans take heed - the song details groups of people encountering the unknown and greeting it with fear, not realising it’s the very thing they are there to seek, or celebrate, like a surprise party, when the guest of honour arrives and gets duly attacked as an intruder.

As Plato acknowledged “the unexamined life is not worth living” and The Scottish Enlightenment is only too happy to attest this on Taxidermy Of Love, where choral hums and the beautiful sounds of the Clarsach provide the foundations of a prayer song, authored by someone who feels unable to change themselves, looking for some divine stuffing with lines like, “Make what cuts you need, slit the torso side, like curtains part the skin, take out the crap inside, fashion lungs of steel, program the heart to care, a mind that will not wander, and paint it like I can bear.”

Mountainous crescendo-oeuvres unfurl with punch-the-air guitars and propulsive drumming on Little Sleep and Necromancer’s murky space-rock, a twisted love song in which the song’s persona loves someone despite everyone believing they are dead; they believe that they will awake. Are they the sole faith-keeper, resolute and sacrificial in their love? Or are they, like, mental?

At their most fragile on Pascal and The First Will Be Last, the band strip back to the bare essentials: slow tempos, conversational voices, powerful lyrics, and minimal instrumentation. The emotional heft is breathtaking with Moyes at his most confessional on the latter, a sad tale of the son of manse turned apostate, a mantra for struggling with personal demons - “Bible in hand, I changed my plans and it fell on the floor, I still went to church with anger and mirth, I taught Sunday school and my cup was full, my spirit is blackening fast”.

Elsewhere on The Soft Place living donor transplant surgery is pondered with characteristically understated melodies atop a mélange of tumbledown drums, subtle tremolo guitars, funerary cornet and heavenly glockenspiel, and on List Right, we are treated to a waltz of sorrow where low frequencies rumble and a menacing piano resonates with stirring effect like something out of a dark version of Death on the Nile.

Beautifully observed and unnervingly honest My Bible Is provides a triumphant conclusion to the record with ambient textures, eerie tension, and the organic build of genuine emotion when faced with believing something false, and doubting something true. Given the scarcity of genuinely affecting music nowadays it’s a milestone that should elevate The Scottish Enlightenment to the highest ranks of Scotland’s gifted breed of songwriters.

“On a human level the truth is that I saw Church to be filled with the best of things and the worst of things - just like any other group happening really. And the loving, compassionate, self-giving people I know from Church makes me wonder why it is they seem to have a different core to them than I do. And the small minded people make me wonder how they can be so long on the earth and not have learned better. But if anything, this song is supposed to be a level headed realistic account of what Churches are, and what religion is. As such, I don’t expect it to chime with either Richard Dawkins or Keith O'Brien. The main problem with writing songs about big ideas is you inevitably sound like a knob when asked to talk about them. You write the song so you don't have to talk about them. Scunner.” David Moyes

St. Thomas is an intensely rewarding and poetic triumph from a band that has resolutely pursued its own unique vision and grown immeasurably in stature as a result. It's a rare thing to have an album as lyrically provocative as it is musically intrepid; Lingering long after the ghostly instrumental coda Cogito has vacated the stereo. It’s delicate and it’s fractured. It has one foot in this world and one foot in some supernatural place. It’s heavy, powerful and evocative and for those of us who have lived any kind of life with all its misgivings, moral dilemmas, emotional crossroads, regrets, and loves it is a record that should be cherished.

Spread up and down Scotland's east coast like margarine, The Scottish Enlightenment make high ceiling, Smoo Cave, flame-lit music, despite everything.